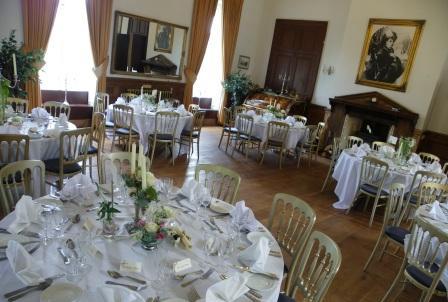 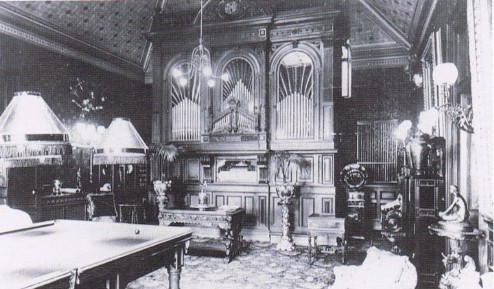 What is today known as the Function room was once made up of two separate rooms, the Billiard room and Music room.

However in the hospital days, the wall separating the two rooms (shown in picture bottom left) was removed thus making a large ward for the female patients and some small children. I have also heard of this area being referred to as the Mens Ward, so it may have changed over the years.

In the Billiard room, the room with the newer wooden floor that you enter first, there would have stood an 18' electric organ, an 'Orchestrion'. This stood slightly in front of where the glass topped, Louis table stands today (top left picture shows the table on an old patterned 1970's stule carpet before it was replaced with the new oak floor).

Most wedding breakfasts are now held in the Conservatory and the main Function Room is instead used for Evening Wedding Parties.

In Adelina Patti's day the far room - the Music Room - would have echoed to the sound of pianos playing and Adelina Patti practicing her singing, while her second husband Nicolini would have enjoyed listening to the Orchestrion in the Billiard Room (probably not at the same time).

The ceiling of the Billiard room would originally have been flat glass, with what is known as a 'lantern roof' above, to let light in for the Billiards Table. The Lantern roof has long since been replaced with a pitched slate roof though we are not sure if this was in Patti's time or later.

You can see an example of a lantern roof in the Theatre, or rather, from the outside if you look - it is still intact. There would also have been a lantern roof above the Conservatory; this too has long gone. 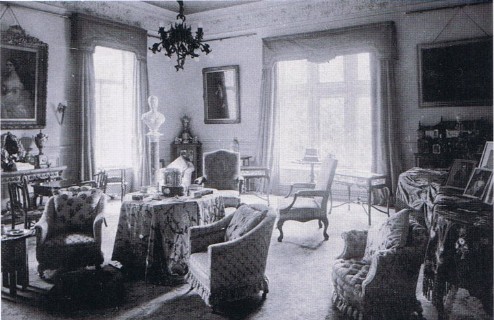