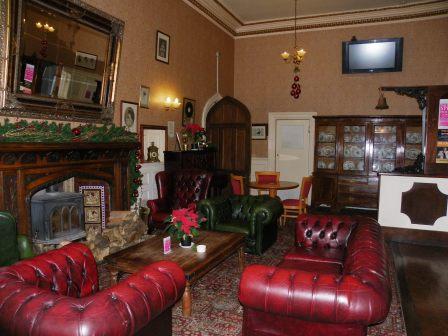 Is what follows a Ghost Story or more to do with the Energy of the living?

This story concerns the owner of the castle, Martin. He was standing in the kitchen preparing some food with Steve Sax's brother, Ian, when the 'IN' door started FLAPPING MADLY to and fro, very fast. (White door next to entrance door to bar, shown in picture on the left).

Everyone else was in the 'Blue Bar' that night. So the Patti bar was empty and the doors closed.

The door to the kitchen flapped to and fro repeatedly, very fast - too fast for anyone to be moving it by hand. This carried on for what
seemed like a minute or more.

Enough time went by for Ian and Martin to remark upon it, debate whether it was the wind, decide it wasn't either the wind or anyone the other side (it was moving too fast for anyone to be physically able to sustain the rapidity of movement for so long a duration), and as it continued madly flapping, to wonder when it would stop.

On entering the Patti bar subsequently, it was noted no one was there and the doors into the Patti bar and windows were all closed, so there were no draughts that could have caused so violent a shaking of the door. This phenomenon has never been observed before or since. However some similar phenomena have been observed around Steve's brother, and in his presence, hence Martin's view that some reports of poltergeist activity may be a manifestation of a form of living energy, rather than anything to do with ghost hauntings.

Return to the Home Page Ghosts